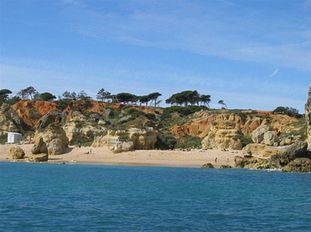 We were sorry to leave El Rocio, which was an excellent campsite.  Toilets with seats and paper, hot water in the washing up and laundry sinks, fresh-baked bread for sale in the bar and a small library in reception - what more could one want?!  The surrounding area was so full of interesting birds - glossy ibis, azure-winged magpies, spoonbills, flamingos, and storks on every pylon, chimney and church tower. They inspired some typical "dad jokes" - is a baby stork called a twig?  And if the stork brings human babies, does a flying human bring baby storks?!   We saw all sorts of unusual flowers, too, including Lusitanian fritillary, birds' nest orchid and tongue orchid. It was time to move on, but we would like to return to El Rocio in the future.  After spending more than three months in Spain and getting used to the language and customs it was a bit of a culture shock to enter Portugal.  The language looks reasonably similar but sounds completely unlike Spanish - more like Russian, in fact, with lots of "sh" and "zh" sounds.  We also had to put our clocks back an hour, so we are now back on UK time. This was in itself confusing, as we had only just put them forward an hour a few days earlier for summer time.   Our campsite was Camping Orbitur Quarteira on the Algarve, not far from Faro.The resort of Quarteira itself was not particularly appealing - all concrete and no character - but the coast was lovely.  (We were to find that this pretty much sums up the Algarve: fabulous coastal scenery twinned with charmless over-development. You would think that they would have learnt from the Spanish and their over-development of the Costas a decade earlier). There was a path from the campsite down to an almost-deserted beach backed by a reed-fringed lagoon full of interesting water birds (including red-crested pochards!)   The campsite was large and quite good, though the ablutions were not up to El Rocio standards!  However the weather was glorious and for the first time in 7 months we are in a site with a swimming pool which is open!  Mind you the water is a bit cold so we haven't been brave enough to use it! While we were in this area we took the opportunity to visit my old school friend from Wallasey, Glenys, whom I haven't seen for years.  She and her husband (another John) have lived in Portugal for over 10 years, in a lovely villa in the hills behind Faro. We spent a pleasant few hours on their terrace, enjoying the distant view of the sea and catching up on family news. I had my first-ever caravan holiday with Glenys and her grandma, in 1958 or 9. It was in a field outside Chester - not exactly far from home! - and I can still recall the special calor-gas smell and the soft hiss of the gas mantles at night, which made it seem so cosy.  We used to lie awake in our bunks until the early hours, telling silly jokes and giggling.  Just like John and I still do!! Although we spent most of our days just sitting in the sun or walking on the beach, we did spend some time exploring the Algarve coast.  Right next door to Quarteira is Vilamoura, a smart resort serving the yachting and golfing crowd. We enjoyed wandering round the large marina and went on a short cruise along the coast, as the interesting cliff and rock formations are best seen from the sea.  It was a very pleasant three-hour trip, but obviously not exotic enough for some modern travellers. One young woman told us afterwards that it wasn't the most exciting trip she'd ever been on.  John replied that it was not as interesting as a trip to the Farne Islands or the Skelligs. She of course could trump that- it turned out the last boat trip she'd been on was off the coast of Canada, and she'd seen several pods of whales!  Perhaps modern travellers are used to such fantastic experiences that they've lost the ability to enjoy the gentler pleasures of life. We also drove along the coast, and found the resorts of Albufeira, Portimao and Lagos to be modern constructions with little appeal except for their fantastic, and very clean, beaches.  However, a kilometre or two east of Albufeira, we liked Praia da Oura, which had plenty of hotels and apartments but still managed to be attractive, and had a fabulous beach with all sorts of amazing rock formations and caves.  It struck us as an ideal place for a family holiday, with rock pools and the kind of sand just perfect for sandcastles.  At Alvor, near Portimao, we found a quiet beach with a small restaurant where we ate delicious grilled sardines.  And just past Lagos we climbed down a steep staircase cut in the cliffs to reach the magical Ponta da Piedade, where for 10 euros you can take a boat trip around, through and into the numerous rock arches, pillars and caves. Imagine Flamborough Head with clear turquoise water, warm sun and golden sand, or Durdle Door with not just one arch but dozens!    We then drove on to Sagres, the most southwesterly point of Europe, where the full force of the Atlantic pounds against the high cliffs and the beaches are a surfer's paradise.  So it's not difficult to avoid the tackiness of the package-holiday Algarve and find spectacular scenery. Our next stop will be at Evora, far from the sea, mid way between Lisbon and the Spanish border, where we hope to find the kind of historic and architectural heritage that was missing on the southern coast.