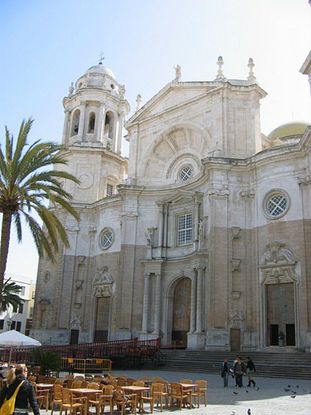 As well as the annual pilgrimage, each Hermandad has an allotted weekend for a visit.  Each weekend four or five towns will be sending a delegation.  They meet up on Saturday for partying and fireworks.  Horse riders strut round the town doing party tricks on their horses, much like Californian youths might cruise the Strip in their flash cars or young motorcyclists do wheelies in the high street. Then on Sunday they parade through town, many dressed in traditional costume, playing guitars and beating drums, making formal visits to the other visiting Hermandads, then parading to the church with their banners (not unlike the old Miners' Gala) to be blessed by Nuestra Senora.  Then they parade through town again back to their respective Hermandads for celebration meals.  Meanwhile Spanish families not part of the Hermandad will gather in the parks and cook huge communal paellas.  The National Park is also well worth a visit.  Most of it is fenced off to exclude all bar the few who live and work there.  This ensures that it remains a haven for all sorts of wildlife, a lot of which spills over into the parts accessible to the public.  As well as wild boar, red and fallow deer, the European Lynx has one of its last strongholds here.  Soaring above the park are red and black kites, imperial eagles, booted eagles and ospreys, whilst flamingo, spoonbills, stilts and glossy ibis wade in the marshes.  The ubiquitous stork nests on every pylon.  We have had several very pleasant walks in the park, spotting birds and flowers we had not seen before. Seville is just 40 miles away, so we had to have a day trip to see it.  I am so glad we did.  It really is a beautiful city, with the elegance of Paris and the history of Granada. The Moorish influence is still strong, with the Alcazar, or royal palace, not quite as old as the Alhambra but almost as beautiful  The cathedral is immense, the third largest in Europe after St Peters and St Paul's.  Actually, architecturally, it is a bit of a hotchpotch, but impressive nonetheless. The bell tower, which as in many Andalucian churches, was formerly a minaret, is more famously known as La Giralda, named for the weather vane being held by Faith, the bronze at the top.  We climbed as far as we could, up the sloping ramp within the tower, to the belfry, from which the views were great. 40 miles west of El Rocio is Huelva, the last major town in Spain before the Portuguese border.  This is a port on the estuary of the Rio Tinto.  Yes, it is that Rio Tinto and it really is red, well, a mucky brown colour running through red sands.  Many miles upstream is one of the largest opencast mines in Europe.  The estuary is a mass of oil refineries, complete with the smoke and smell.  However, across the river from Huelva is the little village and monastery of La Rabida, whose abbot financed an exploratory voyage in 1492 by one Cristobal Colon  (how the name translated to Christopher Columbus I do not know).  Replicas of the three ships, Nina, Pinta and Santa Maria, which themselves copied the voyage 500 years later, are moored here, in almost the same spot as they set off from on their epic voyage. The setting does not really do them justice, with the backdrop of petrochemical plants, not unlike the canal boat museum at Ellesmere Port. It was amazing to see how small these boats are.  As Lesley said,  " I wouldn't cross the Mersey in one of those, never mind the Atlantic".  We are staying here in El Rocio for a few more days, partly to see another weekend's festivities but mainly because it is so relaxing here.  It is a lovely site, with all the facilities we need and pleasant company around.  It is amazing how many people we see who we have seen at previous sites.  One couple from near Macclesfield, Ken and Diane, we first met at Oliva, then again at Cuevas Mar near Mojacar.  They moved on to Portugal, and then lo and behold here they are at El Rocio on their way back.  We have had a couple of sessions with them around a glass of wine comparing notes and it is so useful to us amateurs to pick up tips from seasoned travellers such as these.