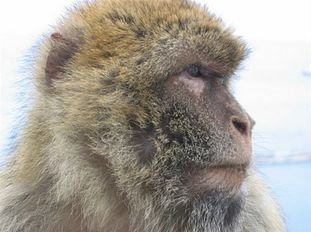 As I have been suffering from "writer's block" Lesley has written the last two episodes.  Now I have recovered we can return to the usual cynical and sarcastic pattern.  And there has been plenty to be cynical about of late.  And, fortunately, there has been plenty to enjoy as well. We arrived at Camping Paloma, near Tarifa, in sunshine.  Blue skies, 26 degrees, and wind.  We had expected it to be windy on this coast and we were certainly not disappointed.  In fact, what we had expected was a light breeze compared with what we got.  We stayed for four nights, and all day and night the whole time we were there the wind howled through the site, first from the east, then form the west, then back from the east.  But it was not just the wind; it was the sandstorms the wind generated.  The beaches here are beautiful soft sand, backed by dunes and umbrella pines.  After two days we felt that the entire beach was in and around the caravan.  Everything we touched was gritty.  Everything we ate was gritty.  A beer would dampen a dry throat for just a few minutes before it became parched again.  Only Lawrence of Arabia could have possibly enjoyed it. We did not attempt to put the awning up, but did manage to peg down the groundsheet outside the door to provide a foot stomping area.  Returning from a trip out one day the groundsheet looked to have disappeared.  No, it had not blown away; it was hiding under a new dune.  Not for nothing is this coast the wind surfing and kite surfing centre of Europe. The 10-mile long beach between our campsite and Tarifa is lined with campsites, small hotels and wind surfing schools.  Muscular longhaired surf dudes of all nationalities, but mainly German, abound. The hills behind the beach hold Europe's largest density of wind farms, their rotors spinning and roaring, casting giant shadows across the roads and fields.  At one point I did wonder whether these were not really generating electricity but actually generating the wind for the benefit of these surfers. Nevertheless we enjoyed this area, the eastern end of the Costa de la Luz, which really is beautiful.  The mountains of the eastern side of Andalucia have ended, giving way to rolling countryside not unlike the South Downs, or Dorset, although with a very different flora and fauna.  Fields of cattle are not dairy cows, but long horned bulls and bullocks, bred for beef or for fighting.  Fields of horses ready to be broken in and trained for ranching or bullfighting.  Eagles and vultures soar overhead, while cattle egrets sit in the fields and yes, it's true, on the backs of the cattle.  The olives and almonds of eastern Andalucia have given way to cork oaks, cornfields and the odd vineyard.  The architecture is very Spanish, and it is the buildings of this region that influenced the building in Latin America, with ranches and pueblos that look decidedly Mexican. We had two targets for our stay here (no, after 40 years at work I cannot live without a target).  First, we wanted to see Jebel Tarik, the mountain conquered by the Moors in 711 and held by them for 750 years, only to be ceded to GB 250 years later.  It's name means Tarik's Mountain, and has been corrupted to Gibraltar. Secondly we fancied a day trip to Morocco, Tangier being only 35 minutes away from Tarifa by Hydrofoil. The African coast was clearly visible and so tempting.  Well, only 50% of target met, no bonus this year.  At least I don't have to justify this in my appraisal.  The fact was it was just too windy for the boat, and most sailings were cancelled.  It might have been possible to go on one day, when the wind had dropped to mere hurricane level, but there was a risk that we might have got there and then not been able to return.  So we had to satisfy ourselves with a day out in Gibraltar.

I had always imagined Gibraltar to be at the end of the chain of mountains down Andalusia's east coast.  In fact it is a huge rock standing in isolation at the end of a flat peninsula, and you have to travel a good 50 miles inland to get to a mountain.  This only serves to make the rock even more impressive.  The border point was reminiscent of some of the eastern European ones we had crossed.  Lots of guards, queues, barbed wire and railings, customs houses and general chaos.  Then once over the border you hit the airport.  The runway is built east-west across the isthmus and the road into Gibraltar crosses it. When a plane needs to land or take off the road is closed, causing even more chaos at the border.  Then you reach the town.  Gibraltar has a population of about 30,000, squeezed into a strip of land at the base of the rock about 500 yards wide by 2 miles long.  It would seem that each member of the population owns at least three cars.  Every square inch of land is parked upon.  Most cars don't look as if they have moved for months, probably because there is nowhere for them to go.  Every single one of them has at least a dozen scrapes, scratches or dents. Then, because they cannot move their cars, they all whiz around on motor scooters, ignoring all rules of the road. The town itself (I am reluctant to call it a city and its correct title of Self Governing Crown Colony is a bit of a mouthful) is a bit of a dump. The main street, which strangely enough is called "Main Street", is just a collection of electronics shops, jewellers, off-licences, tobacconists and gift/tack shops.  Gibraltar is a tax free zone, so that is what it thrives on.  £6 for a litre of scotch, £8 for a carton of cigarettes. Models of British phone boxes, British Bobbies, and of course thousands of toy monkeys.  There is a Marks & Sparks and a BHS, so we had hoped to stock up on a few clothing items, but the range was limited and, strangely, the prices were astronomical! What was awe-inspiring was the rock itself.  We had intended to go up it by cable car, but we were thwarted by the fact that we could not park and the fact that the cable car was broken anyway.  So we spent the best part of £20 on the toll road up the side of the rock.  Money well spent and great value. The narrow winding road provides fantastic views over the bay to Algeciras, over the airport to the Costa del Sol and over the Straits to Africa.  Half way along the route we stopped at St Michael's Cave, which is really a bog-standard limestone cave, stalactites and stalagmites abounding with the usual shapes and names.  However there is a large central cave, which was used as a hospital during the war and is now a concert hall. A little known fact is that eight years before the discovery of that famous 60,000-year-old male skeleton in the Neander valley a similarly aged female skeleton was found in these caves.  If the reports had been publicised quicker then we would never have heard of or used the term Neanderthal man, it would have been Gibraltar woman! Outside the caves we knew for certain we were on British soil.  We had a coffee in the café there.  Dirty tables, weak coffee, long life muffins and an out of order toilet.  Home sweet home! What was not like the UK though was the wildlife.  The Barbary apes, which are actually tailless monkeys and should be called Barbary Macaques, are all around, jumping onto the roofs of cars and buses, swinging from the wing mirrors and grabbing for food.  Not unlike a safari park actually, so perhaps we were still in the UK after all.  Further down the road was the Apes' Den, where their "official" feeding station is.  The mothers and their babes were fascinating, and almost human in their expressions. The adult males were strutting around either looking for a fight or doing what many testosterone charged males of the species do. One of them looked very much the worse for wear, with nasty scratches across his shoulders. There was no way of telling which of his activities had lead to the injuries.  Needless to say plenty of photos were taken.  At the landward end of the rock are the "Great Siege Tunnels", built by the British army in the late 18th century and extended during World War 2. From the embrasures the cannons pointed up the coast and out to sea.  The views were excellent.  Then nearby is the Moorish castle, whose tower has survived 700 years of sieges by Spanish, Moorish and British and German armies and navies and also generations of tourists. We had heard many good reports of the Costa De La Luz, which is the correct name for this windy corner of Spain, so we set out to explore the coast westwards from the campsite.  Quite close to the site were the ruins of Baelo Claudia, a Roman city and fish-salting base from the second century BC.  About 2,000 people lived here and they were provided with a basilica, a theatre, a forum, a market, a thermal baths and four temples.  These days they would be lucky even to get a post office.  The ruins were nicely excavated and displayed and it was easy to imagine how it would have looked in its heyday. Its position, on a beautiful sandy beach backed by umbrella pines, was delightful.

Further up the coast we went through Vejer, an amazing town of whitewashed buildings and narrow alleys perched on the top of a hill, and then down to the coast to see Cape Trafalgar.  It was hard to imagine how the two bays either side of the cape would have looked at the time of the battle, filled with the British sailing ships, hemmed in by the larger Spanish and French fleets. According to the historic sign here the reason that we won was that the French commander, Villeneuve, who had the British trapped, decided that his fleets should turn around and be ready to sail back to Cadiz as soon as the battle was over.  It was while they were carrying out this manoeuvre that Nelson was able to attack and rout the other two fleets.  We are all taught history from the point of view of our own country.  We learned at school that Nelson won the battle of Trafalgar.  The Spanish are obviously taught that the French lost it for them.Nelson, of course, lost his life and his body was shipped back to England pickled in brandy.  Most of the others who died are buried in a nice little graveyard, which we saw, by the city walls in Gibraltar.  I am not sure if Villeneuve survived.  Perhaps he fled to Canada in shame to found a family of racing drivers. After four nights in Tarifa we had had enough of the wind and sand and decided to move on.  We felt there was a lot to see in the Cadiz/Jerez area, so we moved to a site at El Puerto de Santa Maria, which is New Brighton to Cadiz's Liverpool, only smarter and sunnier.  It is a pleasant site, with excellent facilities and showers that even Lesley is able to operate.  More of this in the next edition...........