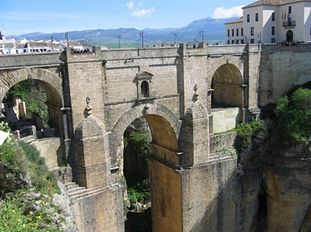 After the strange showers at the Cordoba campsite I was keen to try out the facilities at our new one, so I trotted over to the toilet block on our first evening.  At least they weren't push-button, although they were just as idiosyncratic in their way.  It took about 5 minutes before the water ran hot, and the flow was so feeble that "trickle" would be a more accurate word than "shower".  At least I didn't end up with the entire cubicle and everything in it being soaked, which has happened in the past - in fact, it was quite a challenge to get completely soaked myself, so meagre was the amount of water coming from the nozzle.  But on the plus side, the toilets had both seats and toilet paper, and I didn't have to wade through mud to get there!! Our stay on this section of the Costa del Sol was more for a bit of R and R than sightseeing, as it's extremely built-up and very much a Brit enclave.  English and Irish pubs and cafes advertising Full English Breakfast and Sunday Roast with Yorkshire Pudding abound.  However, as a large pine tree in front of the caravan blocked our TV reception, it was useful to find English newspapers readily available. It was also an opportunity for me to get a much-needed haircut from an English-speaking hairdresser, a very nice chap from Kent called Ken. Although very urbanised, this part of the coast is rather smart, with well-tended gardens and lots of beautiful golf courses.  We went into Marbella just to see what it was like and weren't particularly impressed, apart from the pleasant "old town" area and a plaza near the sea front full of Salvador Dali bronze statues. The best thing we saw was a guy building an amazing sandcastle!  We also drove a little further along the coast to Puerto Banus, to gawp at the millionaires' yachts in the marina, and the designer boutiques selling unwearable clothes at unbearable prices.

The stretch of beach nearest our campsite was quite pleasant, backed by small private houses rather than huge hotels and apartments, but it was quite a hike to reach it, first by crossing a bridge over the very busy coast road, then through a maze of quiet residential streets.  At the weekend it was full of Spanish families, and all the little beach bars were packed. It was warm enough for sunbathing but no-one was brave enough to swim as the sea is still cold.  On the subject of the coast road, those who have been to this Costa will know what I mean.  For those who haven't, imagine the old two lane M1 with a speed limit of 60 which no-one observes.  Then add a slip road every 100 yards.  Then ensure that the slip road is only 10 yards long, not much better than a T junction.  Finally add a bendy bus service with a bus stop every 200 yards! A few miles north we came to Fuengirola, a more down-market version of Marbella.  However, a short drive up into the hills behind the coast took us to an extraordinary sight - a dazzling white Buddhist stupa with a gilded roof. Inside, joss-sticks burned before a golden Buddha and colourful paintings covered the walls.  Outside, there were wonderful views down to the coast.  Driving further we came to Mijas, a small town of white houses high on a hill, rather like Mojacar.   There was a pleasant walk round the old walls amid gardens, again with lovely views of the coast. Our main expedition in this area was to the picturesque old town of Ronda.  The drive up the steep, winding road revealed distant views of Gibraltar, and overhead vultures and eagles soared.  Ronda is spectacularly situated on a deep, rocky ravine, El Tajo, crossed by a famous eighteenth-century bridge, the Ponte Nuevo, or New Bridge.  (The old bridge is much smaller and was built by the Moors.) On one side of the bridge is the old town, with cobbled streets, whitewashed houses, old mansions and shady squares. On the other side is the more modern area, including the bullring and its museum.  Ronda claims to be the cradle of the "sport", if you can call it that, because the rules and style that are still used today were developed here in the eighteenth century. The bullring is the oldest in Spain and is very elegant and the museum was interesting but it didn't inspire either of us with a desire to see an actual bullfight. Other than these few outings we spent most of our time just sitting in the warm sun (and catching up with the washing!)  On our last day we took full advantage of the very Brit-oriented shops in Fuengirola.  First we went to a charity shop, few and far between in Spain except in ex-pat areas.  We handed over numerous jigsaws and books that we'd finished with and bought a fresh supply.  Then we went to Dunne's, an excellent shop from Ireland, rather like a cheaper version of Marks and Sparks.  We bought polo shirts, knickers, jeans and face-cloths (they don't seem to sell them in Spanish shops.)  Finally, I have to admit we paid a visit to Kwik-Save (O'Toole's Kwik Save to be precise), to stock up on the few UK items we miss most - proper teabags, marmalade, Nice biscuits and Imperial Leather soap!  They sell nothing but British food, at rather high prices of course, and even have a small café where we had a rare treat - a hot Cornish pasty for lunch!  The Spanish don't seem to go in for savoury pies very much. Then it was time to pack up and head off for our next destination, Camping Paloma near Tarifa.  This is the most southerly point of Spain where the Mediterranean meets the Atlantic, so it can be extremely windy.  We shan't even bother to put up our awning here, it would just blow away!  Watch this space for the next windy instalment.