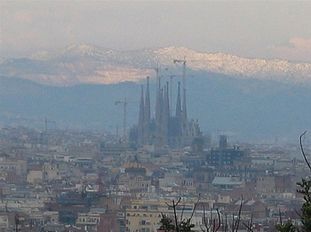 Tomorrow we up sticks and move south.  That is if we ever get a chance to.  For the past 24 hours the rain has come down in torrents.  Last night it was accompanied by a terrific thunderstorm, the lightning filling the whole valley with flashes of blue light, the thunder rolling from hill to hill and so loud the caravan was shaking.  But we count our blessings.  We have had none of the freezing temperatures seen in the UK, nor the snow seen in France.  A couple arrived on site the other day having spent the previous night stuck in snow near Orange.  Yes, it has been chilly, and we have seen a bit of snow on the hills, but when the sun comes out it is warm and fights valiantly to take the chill from the air.  On New Years Eve we went for a walk along the prom and sat out in the sun with a coffee. We had an enjoyable, if tiring, week in the UK over Christmas.  It was good to see the family again, but we were glad to be back to our little home on wheels.  The cats were pleased to see us back as well.  I doubt if anyone had fed them in our absence as they came rushing out of the awning crying for food.  We saw in the New Year twice!  With the time being an hour ahead here we were able to celebrate midnight in the bar with a number of other Brits and a host of Spanish.  We got some strange looks as we gathered round to sing Auld Lang Syne, then the room returned to dancing the Macarena. After that we first-footed at our neighbours, who had a midnight Skype call with one of their old friends in England. It was strange to see the London Eye fireworks on a web cam pointed at her television!  This was followed by an Internet sing along when Desme got out her electric piano.  Having seen in the Spanish New Year with a San Miguel, it was nice to do the job properly an hour later with some excellent malt that Michael had given us. Since then we have been relaxing, walking along the beach and generally doing not much at all.  We took the opportunity to visit the railway museum in Vilanova, which houses Spain's largest collection of steam locos, all arranged in a semicircle around a huge turntable. There were also a number of old coaches and the original Talgo coach set.  These were, at the time, ultra modern in design and in engineering, providing luxury travel in carriages which were able to move from one gauge of rail track to another.  Their modern equivalents still provide Eurostar style travel across Europe.

We have had two trips out, to Reus and to Barcelona.  Reus, some 100 km south of Barcelona, is probably best known in the UK (if at all) as a destination for cheap Ryanair flights to "Barcelona", but the town itself is attractive with many distinctive Modernista buildings and was the birthplace of Gaudi.  The main architects in Reus were Montaner and Tarrats, and their buildings are scattered along the main shopping streets. Just outside Reus is Montaner's Institute Pere Mata, a mental hospital built in quite revolutionary fashion.  Montaner believed that greater peace and recuperation could be gained by building a hospital as a number of smaller pavilions, separated by gardens, rather than as one huge institution. So successful was this building (presumably in its design rather than its curative abilities) that Montaner was asked to repeat the exercise in Barcelona.  The Hospital de la Santa Creu i Sant Pau, which we visited a few days later, was also built as a mental hospital but is now used as the main University Teaching hospital. We paid our second visit to Barcelona specifically to see this building, to revisit the Sagrada Familia, and to tour the Catalan Museum.  The Hospital is enormous and quite breathtaking.  It covers the equivalent of nine city blocks and the buildings themselves are so decorative and full of symbolism that it is impossible to do them justice in this short space.  So I will shut up and let the pictures do the talking.The Sagrada Familia is progressing, slowly.  Lesley recently read a trashy Dan Brown type novel (The Gaudi Key), which suggested, amongst other things, that the Second Coming would take place when the building was finished.  Given the rate of progress that is a long time off.  We did see some new parts though, erected since our last visit in 2001, in sparkling new stone. However the main view is, as always, of scaffolding and cranes.  The Catalan Museum, MNAC or Museu Nacional d'Art de Catalunya, to give it its correct title, is enormous.  The entry ticket is valid for two days, and to study its contents in depth you would need at least this.  Its main claim to fame is its collection of Romanesque frescos, rescued from derelict Romanesque churches around Catalonia. These are arranged more or less in chronological order, built into made to measure artificial apses or even full size replicas of the church they were taken from. It was fascinating to see how religious art developed over the centuries, to see the influence of other regions come to play, and the influence they must surely have had on later Catalan artists.  Further rooms in the museum covered Gothic and Renaissance periods, where the development continued.  Then there is a huge collection of modern art, including local boys Picasso and Dali, and also art, designs and furniture by the Modernistas. Again it was so interesting to compare the furniture designs with those of Rennie Mackintosh which we had seen in Glasgow in 2007, Klimt which we had seen at the Tate in Liverpool last summer and Gaudi here.

Whilst sitting in the MNAC café, with a can of pop, I began to Fanta-sise about time travel.  Whilst the development of art and style and the influence on later generations was shown by the layout of the exhibits, I wondered if actually the reverse was true, that modern artists and techniques were used to influence fresco painting in the 10th and 11th centuries.  The evidence was clear to see.  On the next picture page are some examples:Whilst I am on the subject, it is equally obvious that Gaudi used future time travel and saw his early death.  Only that could account for the fact that he tried to create the front of the Sagrada Familia while the concrete was still wet and dripping. Compare his effort with the crisp carvings of Subirachs, who had all the time in the world to do his side But joking aside, Barcelona is a fabulous city.  No matter what the weather or time of year, or how often you come here, there's always something new to discover.