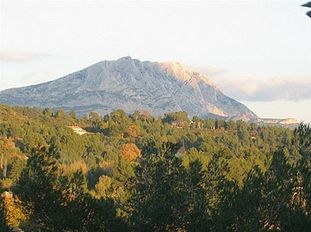 On our last night in San Remo we treated ourselves to a meal in the campsite restaurant.  It was a pleasant change to be on a site with a bit of life - the restaurant was not exactly heaving, but there were several occupied tables, and we had a couple of excellent pizzas cooked in a proper wood-fired oven.  The rain continued overnight but next morning it was bright and sunny as we packed up and set off towards France, leaving San Remo to resume its normal pleasant climate! It was no distance at all to the French border, and from the motorway there were glimpses of the blue Mediterranean on our left and the snow-covered Alpes Maritimes on our right.  We arrived at our destination, Camping Chantecler in Aix-en-Provence, in time for lunch.  It was a large, terraced site with a view of Mont Ste Victoire, subject of many paintings by Cezanne. There were a few other campers but it was bitterly cold.  Luckily the toilet block was well heated! Next day was sunny but still extremely cold.  We drove north of Aix to see the "villages perches" of the Luberon - Bonnieux, Lacoste and Menerbes. They were very picturesque, perched on top of hills amid the vineyards.  Lacoste had a ruined castle which was the family home of the Marquis de Sade, but unfortunately the Café de Sade was closed so we missed out on what might have been an interesting lunch!  Instead we ate in a small place in Apt, which did what so many simple French restaurants do brilliantly - an excellent home-cooked meal at a very reasonable price.  On Wednesday we went into Aix.  The last time we were here, in May 2003, we had visited Cezanne's studio and enjoyed sitting in the sun at a pavement café by a cool fountain.  Aix is full of fountains because it has many warm and cold springs - the name Aix comes from the Latin for water. This time we were wrapped up in scarves, hats and gloves (well, I was - John was his usual hardy self!) and enjoyed the Christmas market on the Cours Mirabeau.  Many of the stalls were selling santons, traditional Provencal figurines to put in Christmas cribs.  We rounded the day off with a visit to the Musee Granet, a small art gallery with a room devoted to Cezanne. As it was so cold, and the campsite was rather gloomy, we moved on next day towards Spain.  En route we passed Beziers, the city we had also passed on 24 June, thus completing a circle. It had taken us 164 days and 11,737 miles to cross from one side of the motorway to the other!

We stopped at Le Boulu, a small town only 8 kilometres from the Spanish border.  We noticed at once that the weather was much milder, even though there was a view from the campsite of the snow-capped Pyrenees. The site was in an olive grove and was called, appropriately enough, Les Oliviers, and they were harvesting the olives when we arrived.  They do this by spreading plastic sheets under the tree then beating the branches with long poles.  We were careful to choose a pitch that wasn't directly under a tree as we'd learned in Greece that olives falling on the caravan roof in the night sound very loud!   The site was not far from the coast so next day we drove to Collioure, a lovely little fishing port which has long been a favourite with artists, including Matisse, Derain and, surprisingly, Charles Rennie Mackintosh. Just as we'd seen on the Impressionists Route on the Seine near Giverny, there were reproductions of their paintings around the town, at the locations where they were painted.  It was a beautiful spot, with fabulous views at every turn, and the quality of the light was so clear and intense we could see why it attracted painters.  As an added bonus, the sun was warm enough for us to be able to sit outside for coffee, and later for a delicious lunch on the seafront (pain bagnat with seafood, washed down with a cold beer.) We hadn't done that since Greece, and it was so good to feel the warmth on our old bones! Collioure has an impressive castle which was the summer residence of the Kings of Majorca in the Middle Ages.  Normally there's a charge to go in but as they were having a Christmas Fair inside, entry was free, and we got to sample lots of delicious local produce too!  A warm day in scenic surroundings had cheered us up no end and we were looking forward to the next leg of our journey, to Spain.  Hasta la vista, baby, and  now over to John....It was an easy journey from Le Boulu to Barcelona, through the gap in the Pyrenees and over the plains past Girona.  However as we were about to pass Barcelona we had an incident which was not altogether unexpected.  Back in Tuscany a German couple had warned us of this road.  "If you hear a bang on the caravan and someone tries to flag you down do not stop", they said.  "Carry on without slowing to the end of your journey, or at least back onto the toll road section.  Do not under any circumstances pull over or go into a service station to see what is wrong.  Your caravan will be emptied within minutes while you talk to the driver of the car that pulled you over". We have heard many tales of problems whilst caravanning abroad, but this was a new one.  Like all these tales, they are true, but put into perspective it happens to a few whilst thousands have no trouble.  Like being mugged in London, you need to be aware, but it is unlikely to happen (unlike being mugged by the banks, which seems a certainty these days!). Nevertheless I kept an extra eye on the mirrors as I covered this stretch.  I registered a silver Merc suddenly change lanes behind me and, like so many, speed off on an exit at the last minute.  As he did so there was a clunk at the back of the van, as if we had driven over a branch on the road.  I thought no more of it until a minute later the same car came down the slip road at the other side of the junction, pulled alongside me then slowed down.  A glance to the left showed driver and passenger gesticulating frantically, then the car pulled in front and slowed down with hazard lights flashing.  I recognised the situation immediately and told Lesley to pull her camera out.  She pointed it through the windscreen and seconds later the car roared off with acceleration quite unbelievable on a crowded motorway.  That had been the last bit of advice the German couple had given us, be ready with your camera! We are now at Vilanova i la Geltru, 50 km south of Barcelona, at an enormous site, Vilanova Park, which in high season might be horrendous as there are over 1,000 pitches, but out of season, when it is about ¼ full, is great. Lots of excellent facilities - three outdoor swimming pools and one indoor one, a gym and fitness centre (of no use to us of course, being well past it), a supermarket, a bar and a restaurant. Although the outdoor pools are closed, all else is open and fully operational, in spite of the fact we are into December.  Better still it is only €6 return by public transport into Barcelona, close to the port of Vilanova, a pretty town, and to Reus, a small town with many Modernista (Art Nouveau) buildings.  There is also a railway museum in Vilanova, allegedly with the best collection of steam trains in Spain.  We are looking forward to a relaxing few weeks here, doing a bit of sightseeing, catching up with the chores, rubbing some of the scratches from the caravan, and a brief flight home for Christmas.  We will probably stay here until after January 6th, which is a special festival in Spain with the Three Kings parading around the towns on floats.