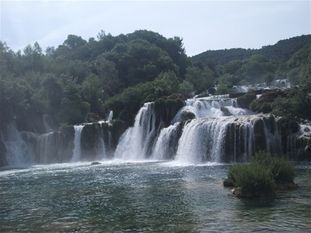 At the foot of the largest series of falls are a host of wooden huts with drinks, cakes, ice cream and souvenirs.  Fortunately for us at this time of year there were not many people around, but in high summer this must be heaving.  Apparently the pool at the foot of this fall, the only place where swimming is allowed, is packed in hot weather.

We started the ascent to the castle, up narrow streets and stairways, with buildings arching overhead in a very Italian Renaissance style.  In fact Sibenik had been part of the Venetian empire for nearly 400 years.  These little alleyways were so far removed from what we had seen in the suburbs that we might have been on a different planet.  Half way up the hill we came across the 'Medieval Mediterranean Garden of St Lawrence's Monastery', a lovely little garden, laid out in 2007 on the site of the old monastery garden.  There was a nice cafe there, so of course it was time for a coffee, this time with a Slimming World biscuit bar. (We’ve had too many sinful cakes lately!)  The place was advertised in the guide book as a haven of tranquillity.  It might well have been, but today it had a huge party of schoolkids running riot on their school trip, while the teachers sat with a coffee and a smoke.  Once they went, though, peace returned and it was a lovely spot. We continued up to the castle, properly known as St Michael's Fortress, which according to the Rough Guide is a pile of rubble with good views.  Our guide book is out of date.  The views are still good, but the castle has been renovated inside to provide a superb outdoor concert hall, at which plays, ballets and concerts are regularly performed.

We wandered back down another maze of narrow streets and stairways towards the town centre, passing a number of splendid old palaces, churches both Catholic and Orthodox, and plenty of restaurants and cafes.  By this time it was getting a bit cold and drizzly and we were getting hungry.  Nearly all the restaurants, apart from the really posh ones, were based on outdoor eating, so we picked the one with the largest sunshades and sat under their shelter and ate a very good value set meal, watching the procession of umbrellas walking past.  It was not until we got up to go that I realised that I had picked the wrong chair.  Whilst I was in the dry, my cagoule, which had been on the back of my chair, was soaked.  Not to worry!More narrow streets and stairs led us back to the cathedral which we entered to see the sight of scaffolding around the inside of the building.  They were starting the mammoth task of cleaning the interior stonework, blackened by years of candle smoke and neglect. We watched one lady with a tool no bigger that an artist's paintbrush, painstakingly brushing at some carved stonework, while a man up a ladder was using some sort of power tool not unlike the one a dentist uses when cleaning your teeth. The parts they had completed looked really good, but it will be several years or even centuries before the job is done.  One part which had been completed was the small baptistry with an intricately carved ceiling.  So back to the caravan to plan the next part of our journey, to the Plitvice Lakes, which in parts are supposed to be even better than Krka.  However we would never find out.  We arrived at Plitvice at lunchtime the following day and parked up at Camping Korana.  Enquiries at the the campsite elicited that there was a daily bus service free of charge, 9 am from the campsite to drop off at either of the two main park gates, with a pick up to return at 5 pm. So which would be the best gate to go for? Well, you can go to either, and there is a boat that takes you down the lake and a road train which brings you back, or vice versa.  So if we went under our own steam, which should we go for?  The largest falls are at Veliki Slap, of course.  However, we were told, it would be raining for the next few days and that the walkways to Veliki Slap were already under water.We went on line to check the weather forecasts and, of course, if you look at four forecasts you will get four different answers.  This time though all were forecasting rain except one, which promised tomorrow morning would be fine.  Decision made.  If when we got up tomorrow it was fine we would race to the lake.  If it was not, we would move on.  We got up, it rained, so as the washing basket was overflowing we decided to move on to Zagreb, where there were washing machines, and, more importantly, tumble driers.  Plitvice would wait until another time.By the way, in case you hadn’t realised, a “slap” is a waterfall or cascade in Croatian, a “potok” is a lake and an “otok” is an island.