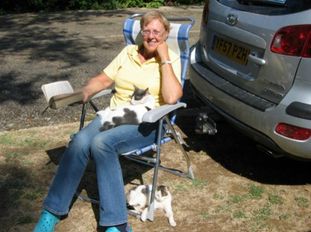 At last, after 2538 miles and 37 days of meandering since leaving the Baltic, we finally saw the sea again on 17 September. The Aegean at its North East corner is not its best side, but nevertheless it was a joy to see.  Alexandroupoli is the first major town you come to in Greece after crossing the border and we headed for the "demotiki" campsite ( it sounds much better in Greek than "municipal" does in English).  This excellent site, Alexandroupolis Beach, has spacious pitches with a hardstanding area for the van and a large grassy area with plenty of room for the awning, the car, and space to sit and relax. The shower blocks are clean and have plenty of hot water.  As the holiday seaon had finished the shop and restaurant were closed, but there were still enough people staying on the site to make it interesting.  It's right on the beach and we were longing to swim in the clean, warm sea. However we couldn't enjoy a swim for almost a week as the heavens opened soon after we arrived, and then there were other things to do!  Alexandroupoli is a very pleasant port,though not a holiday resort as such - in fact I doubt they get many British visitors.  But there are plenty of inviting tavernas, restaurants and bars along the sea front, a good range of shops, and a huge weekly market by the harbour.  Off the coast  just opposite us here is Samothraki, an island only 12 miles long but rising to over 5,000 ft.  Every day we had a different view of it, depending on the weather.  On a clear day it was impressive, on a dull day it disappeared completely.  Our favourite was on the stormy days, when it wore the cloud like a low slung hat.When we were leaving Prague, all those weeks ago, the motor mover on our caravan packed in.  It was under warranty, but the nearest dealer was in Slovenia, which would have involved a huge detour. A very nice service mechanic at Reich talked me through how to remove and repair the mover (whilst we were on the cable car in the Tatras as it happens), but when I did this and reported back to him he had to confirm that it was b****d and would have to be replaced.  A new motor would be dispatched and be with us in a couple of days, where should he send it?  Well, being of no fixed abode, we decided to leave it until we were in a place where we could sit and wait.  Now we were in Greece, in more favourable conditions, we could send for it.  A phone call, an e-mail, and the replacement motor was despatched.  A week later it had not turned up, and after many phone calls we found that it had got stuck in a Greek border guards/customs officer strike.  Frustrating?  Just a bit.  We were left in Alex, ice cold (given the unseasonably cool weather), waiting for Godot.   We had a day out to the Evros Delta, a wetland reservation on the borders of Greece and Turkey, but failed to spot any birds of interest, in spite of miles of dirt road driving.  The river Evros, incidentally, forms the border between the two countries and is known in classical literature as the Hebrus, down which Orpheus's head floated after the Maenads had torn him apart. (Lesley believes you are all au fait with Milton's "Lycidas", but I am not so sure). What we did see was an amazing ruin, in the middle of a field, of Roman baths built by the emperor Trajan (not with his own hands, presumably), in incredible condition in spite of its obvious neglect. This is something we were to find all over Greece. They obviously have so many ruins they can't afford to maintain any but the most important.

Athough Alexandroupoli was a lovely town, its attractions were beginning to grow thin and Lesley was getting too attached to the campsite cats and kittens, so we decided to move on, then slip back for the mover when it arrived.  We therefore set off on 27 September to move further along the coast to Kavala.