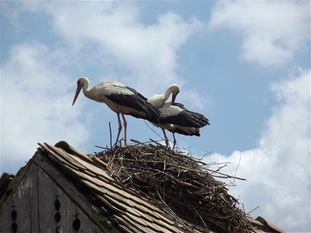 Our route took us through some very pretty scenery, despite the rain. The Plitvice lakes are quite close to the border with Bosnia, and despite large numbers of hotels, campsites and the kind of enormous restaurants that cater for coach parties, the area felt very remote.  There were few towns of any size, and few shops.  In fact there was nowhere to stop for coffee until we finally reached the motorway and pulled into the first services we came to for our morning “fix” of coffee and cake!Because it’s fairly high up, Plitvice is also several degrees colder than Zagreb, so we were pleased to see the temperature gradually rising to a pleasant 19 during the course of our journey, even though it was still very cloudy with flurries of rain. The approach to Camp Zagreb was rather strange, through suburban streets which gradually became more rural – many of the houses were more like smallholdings, with large vegetable plots with chickens running round.  However it turned out to be a lovely site with an unusual layout.  The pitches were arranged like the spokes of a wheel radiating out from the shower blocks in the centre.  These were state of the art and wouldn’t have looked out of place in a five-star hotel!  The site is set on a lake and has an excellent bar and restaurant, not to mention horse-riding facilities, so we were able to say hello to the horses.  But the most important facility was a washing machine and large tumble dryer, which I made use of almost immediately. Most sites have washing machines but not many have dryers, and after a period of unsettled weather I had a big backlog of washing to do!The forecast for the next two days, Saturday and Sunday 14th and 15th May, was for rain, but we decided that wasn’t a problem as cities have plenty of indoor attractions.  In fact Zagreb has over 80 museums and galleries, including some with, to be polite, limited appeal – the Typhlology Museum, the World of Mushrooms Educational Centre, the Museum of the Croatian  Hunting Association, the Museum of the Blessed Alojzile Stepinac, the Museum of Post and Telecommunications in Croatia, and many more.  I’d singled out three art galleries I really wanted to visit, as well as a handful of churches. The helpful campsite receptionist told us where to park in Zagreb, behind the station.  We couldn’t believe how cheap it was – 10 kuna, just over €1, for the wholeday!  We’d paid that much for an hour in other places.  John was pleased to find an old steam locomotive on display outside the station.  Then we headed for our first gallery, the Strossmayer Gallery of Old Masters, which was supposed to be open from 10.00 to 13.00 on Saturdays.  We’d researched the opening hours, drawn up a plan, and arrived just after 10 – to find the gallery closed.  A small typed notice on the door said it was open 11.00 to 20.00!  So we decided to call in on our way back to the car park, and set off for the Old, or Upper Town.  The Lower Town is full of huge, palatial buildings from the 19th and early 20th century, several of them painted the favourite colour of the Austro-Hungarian Empire, a bright custard yellow.   The Upper Town is older and quainter, although not many buildings survived the catastrophic earthquake of 1880, and is reached by a funicular said to be the shortest in Europe (although John reckons the one in Scarborough is shorter!) There followed a very frustrating half hour.  We aimed for St Catherine’s church which, according to the guidebook, has one of the most delightful Baroque interiors in Croatia.  It was closed, although we could just peek inside and there wasn’t a service going on – however, we could hear the organ playing.  Then to the iconic St Mark’s Church with its colourful tiled roof – also closed, also apparently empty although it looked as though it was decorated for a wedding. Now thoroughly annoyed, not to say wet, we tried to find one of the galleries on my list, the Mestrovic Atelier.  This was the home and studio of Croatia’s most famous sculptor, who lived here from 1924 to 1942.  We had already seen one of his works at Nin - a statue of St Gregory (or Grgr, in Croatian.)  We failed to find the gallery, so went into a nearby Tourist Information office for help, and also to check if any of the other galleries had changed their opening hours.  I asked the young woman behind the counter where the Mestrovic Atelier was. Blank incomprehension.  I know my Croatian accent isn’t impeccable but there aren’t many ways to mispronounce Mestrovic (I’d remembered that the final “c” is a “ch” sound.)  In the end I showed her the entry in the guide book.  Given that Mestrovic is Croatia’s answer to Rodin, her lack of familiarity with him was surprising.  She had to look him up on the computer.  Finally she cottoned on and pointed out a street on our Zagreb map. As for opening hours, her response was to give us a leaflet, which was in Croatian. This had different opening hours, but they were still incorrect!

We went outside and tried again to find it.  Still no joy.  Finally John spotted it – in a different place from where she’d said!  It turned out to be in an old house, with oak panelling and traditional ceramic stoves.  The sculptures varied greatly in both size and materials, and showed many influences – Michelangelo, Rodin, but also references to early 20th century art movements such as Cubism and Art Nouveau, and echoes of Matisse and Epstein.  We were given a badly-printed sheet with a numbered guide to the statues, but the print was very small, and the numbers on the statues also small and often placed very low down.  We were the only visitors, and got the impression that, rather than a public gallery, it was a research facility aimed at young, agile students with very good eyesight!  We were also followed all round the gallery by one of the staff, trying to look inconspicuous but obviously there to make sure we didn’t make off with one of the works. Though as most of them were huge chunks of bronze or marble that seemed unlikely.  It sounds as if we didn’t enjoy it, but in fact we found it very interesting.  Just not very visitor-friendly.The rain stopped and we made our way from Gradec to Kaptol (the two areas that make up the Upper Town.)  This was much more touristy, with lots of bars, pavement cafes and souvenir shops.  We had a pleasant lunch of local cheeses and cold meats, washed down with beer, then made our way to the Cathedral.  To be honest this was the least interesting of the churches we aimed to see, but at least it was open!  From there we walked down into the lower town, which also had a huge number of busy pavement cafes, although I would guess that most of the customers here were locals rather than tourists.  Zagreb, like Ljubljana, is known for its lively cafe society.  We were back to grandiose Habsburg architecture with the occasional Secessionist building, and one of the grandest  was home to our next target, the  Mimara Museum.  The descriptions in the guidebooks of this collection of old masters were intriguing.  Ante Topic Mimara  was a bon vivant and collector, with some doubts cast over both his identity and the provenance, indeed authenticity, of all the Raphaels, Rubens, Rembrandts, Velazquez etc he had acquired, and then gifted to the city.  It was a very odd place indeed.  The paintings were badly hung and badly lit, and there was annoying background music of the “Classic FM’s all-time favourites” variety.  However, as well as the dubious paintings there were two floors of decorative objects from Egyptian times onwards, which may well be the real McCoy.  Our ageing legs couldn’t face another gallery, so we never got to see the genuine Old Masters in the Strossmayer Gallery. Actually, I’m quite glad.  I’ll always look on paintings with a slightly suspicious eye from now on!  Incidentally, in Zagreb we managed to find only the second English newspaper of our trip so far, and like the one we found in Sibenik, it was a Guardian, heavens be praised!  Normally we can only find the Times or Mail when we’re abroad. After a quiet Sunday at the camp site (more washing and drying) we went out on Monday, venturing into the boondocks, an area of wetlands called Lonjsko Polje , an hour’s drive south east of Zagreb.It’s a fascinating area of ancient timber houses, rustic lifestyles and - my second-favourite birds – storks!  And at this time of year they’re nesting.  The journey wasn’t devoid of incident – intending to stop for a coffee on the motorway, we noticed that the first set of services had the symbol for “coffee” crossed out, and had nothing but a petrol station.  The second one didn’t have the coffee symbol crossed out but should have – the cafe was derelict, and we were approached by beggars who seemed to be living rough in the car park!  But we found a small cafe when we left the motorway, and were soon following the course of the flooded River Sava  which has a string of traditional, single-street, villages along its banks, with old wooden houses and, in increasing numbers, storks.  The journey culminated in Cigoc, the Stork Village, famous as a migrating stop for white storks who head here every spring to feast on the fish and frogs in the river and marshes.  There were nests on most of the roofs, chimneys and telegraph poles.

We visited the information centre, located in one of the traditional wooden houses.  The people of this area have learnt to live with frequent flooding. The two-storey wooden houses are built of solid oak planks which don’t rot in water.  The living quarters are on the first and second floors, reached by a covered external staircase.  In times of flood they have a boat moored to the steps, enabling them to get out and about. They rear a special breed of pigs which are at home in the flooded oak forests.  Sadly the way of life is dying, and many of the carved wooden houses are now summer homes for well-off town dwellers.The final town along the stork route was Jasenovac, fought over and much damaged in the 1991 war, and the site of a Second World War concentration camp run by the Ustase, where more than 70,000 died.  This is marked by a memorial in the shape of a huge flower, known as the “melancholy lotus”.  We drove back to the camp site and had a farewell meal in the restaurant (we’re moving on tomorrow.) Cooked in a proper wood-fired oven, the pizzas had a Slavik twist – mine had lots of local ham and salami, pickled smoked chillies and blobs of sour cream as well as the usual tomato and mozzarella, and John’s had gorgonzola, pears, mozzarella and sour cream!  Delicious washed down with local beer.  This was another campsite we’ll be sorry to leave, but the coast is calling.