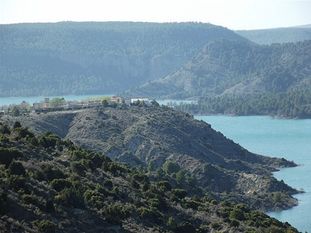 We've got so used to warm sunshine we’ve begun to take it for granted, but on Monday 19th March we had a shock. After spending the morning sunning ourselves by the swimming pool we noticed the wind getting up at lunchtime.  In no time at all it was blowing a gale, the awning was flapping and creaking and the caravan was rocking as it was buffeted by strong gusts.  The only thing to do was batten down the hatches, check the tent pegs, zip up the awning and retreat inside.  The wind continued for the rest of the day and all night, accompanied at times by driving rain, so what with all the noise and movement we didn’t get much sleep.Next morning the rain had stopped but there were deep puddles everywhere.  The wind was still blowing, though not as strongly, but the worst thing was it was cold!  The sky was grey and we even had to put the heating on!  So we had another day indoors.Thank goodness, on Wednesday we woke to blue skies and warm sunshine once again.  We decided to drive to just beyond Mazarron to have a look at the historic mining area.  The hills are full of all sorts of metals and minerals.  The Phoenicians, then the Romans mined here for silver, lead and copper, and in the nineteenth century the old Roman workings were reopened and extended, and for a while there was a thriving mining industry again.  But it was abandoned in the mid-twentieth century  and, in true Spanish fashion, all the buildings have been left there in a state of increasing dilapidation, accessible to anyone who wants to explore (or vandalise) them.  It’s a weird, lunar landscape, with acres of spoil-tips, mud-slides and rock-faces of strange colours – red, yellow, purple and grey-green – with toxic-looking pools of bright red water.  It would make a wonderful set for a sci-fi film, or could be restored as a fascinating industrial museum, if the money could be found.  On Friday we left Los Madriles, rather reluctantly, as it was a lovely site.  Now that the weather has warmed up in the Madrid area we are heading back there to see the many sights we missed on our brief, chilly visit in January.

We broke the journey with a brief stay at Kiko Park Rural, at Villargordo del Cabriel,   midway between Valencia and Madrid.  En route we drove through La Mancha where we saw lots of windmills, but all of the modern, wind farm variety, unfortunately, including one site where there must have been 250 of them clustered together.  I don’t know what Don Quixote would make of them.  We were rather daunted to see small patches of snow under the trees and by the roadside – the whole area is quite high above sea-level, and it’s definitely cooler than it was on the coast.  The rain we had last Monday and Tuesday must have fallen here as snow!  However, the sun was shining and it was quite warm when we arrived at the campsite, which was almost deserted.  The main facilities – reception, restaurant, showers, washing-up and laundry rooms – are housed in buildings made to resemble a typical old pueblo, or village.  The main "street" was like a film set for a Western, and utterly deserted.  We half-expected to see tumbleweeds blowing across it.  However, a couple of hours later the Spanish weekenders started arriving, and it was as noisy as only a Spanish campsite can be! To be honest, there’s little of great historical or cultural interest in the area.  It’s very much a place for outdoor activities – hiking, fishing, and white-water rafting.  The site overlooks a large lake (actually a reservoir) with deep turquoise water, surrounded by wooded hills, with lots of pleasant walks.  On Saturday we drove to the nearest town, Utiel, which must be one of the least interesting places in Spain.  After having a coffee in the unfortunately-named Café Barph we drove on to Requena, a wine-making town little visited by tourists.  Like so many Spanish towns there was a lower, modern town and a higher Old Town, with the remains of a fortress and some wonderful old buildings in a sad state of neglect.  What a contrast with Caceres, where money has been spent on a sympathetic restoration to attract tourists.  We had lunch in an interesting restaurant which had extensive cellars dug out of the rock, which were used in the Middle Ages for storing wine in huge clay jars.  The building belonged to the Church at one time and the cellars were also said to have been used as a torture chamber during the Inquisition.  We had a set menu which featured local specialties.  The waiter spoke no English but we got by with our pidgin Spanish and a dictionary.  There was a platter of assorted starters, one of which the dictionary translated as “ears”.  I thought this was a mistake, but it was indeed a dish of cut up stewed pig’s ears, tasty but rather gristly.  The main course turned out to be sausage, egg and chips!  Admittedly the sausages were an interesting selection – a spicy, chorizo type, a black pudding type and a very meaty, plain one and the “chips were patatas bravas.  The fried egg was just like an English one though.  The Spanish diet relies heavily on pork-based products and, as the saying goes, they use every part of the pig except the squeak.  As well as ears, pig’s cheek is popular, and there is a type of tapas which resembles pork scratchings. On our last day at Kiko Park we went to look at the Contreras dam which forms the enormous lake near the campsite.  We had a splendid view of three impressive feats of engineering from different periods – the dam itself, the motorway viaduct which crosses the lake and the new high-speed train viaduct.  We drove down to where the River Cabriel emerges from the reservoir, and saw a number of wild mountain goats on the steep slopes. Next morning we were up early, preparing to move on.  The clock had gone forward the day before and as a result it was a lot darker, and colder, at 8 o’clock than we were expecting – in fact there was frost on the car, which we haven’t experienced since back in January!  However, once the sun’s up it soon gets warm.  Our next stop is Aranjuez, south of Madrid, the site of a magnificent royal palace and gardens, often described as the Spanish Versailles.