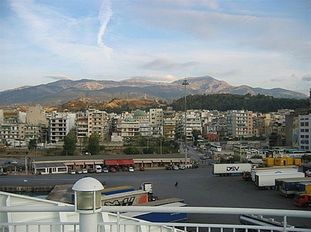 We spent our last 10 days at camping Bacchus relaxing in the unseasonal sunshine, swimming and generally preparing for the next leg of our journey.  Whilst we had originally intended to spend the winter in Greece, we felt that it was time to move on. Greek campsites, whilst adequate, are far from the standards set by our French and German neighbours.  Bacchus was a clean and friendly site, but we felt that as the weather got cooler the facilities were lacking.  Other winter sites in Greece suffer from the same problem.  Many are superb sites in splendid locations, but not suited for over wintering.  Besides, we wanted to stick to sites where there were other visitors.  We don't like crowds, but we do like to see other people on site.  The result is that we have changed our plans completely and are now heading for Spain, to enjoy the winter sun on the Costas.  The downside is of course that we have to pass through cooler damper climes to get there. Our two months in Greece has been a fascinating experience.  We've seen aspects of the country that we'd never have seen on the usual two-week summer holiday, and places that are off the beaten track.  Even the flowers have been a revelation. There were many autumn-flowering bulbs growing everywhere, even on the most barren, rocky slopes - narcissus, crocus, sternbergia and cyclamen.  But much as we love Greece there are some irritating aspects - the crazy drivers, the ubiquitous graffiti, the litter problem.  Apparently Greece has the worst recycling record in the E.U, and it shows.  However it's still a beautiful country with impressive mountain scenery and that amazing blue sea which is still, despite everything, remarkably clean.  We'll definitely be back, though maybe not with a caravan. Two examples of the chaotic side of Greece during our last week there.  One morning we decided to drive up Mount Hymettus to see the view of Athens from above.  All went fine, up the narrow road with the usual hairpins and wayside shrines, then the road disappeared.  It had been stripped, ready for resurfacing.  No road works signs or any indication that the road was closed.  We passed a group of workers having a fag break, and then the road surface became fresh liquid tar. Up another hairpin and suddenly in front of us was a road-laying machine filling the whole road.  No way past, nowhere to turn, so we had to reverse all the way back down.  Why was there no warning?