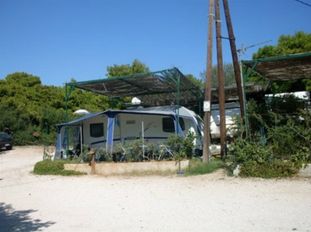 We have been at Camping Bacchus near Sounio for three weeks now, relaxing, swimming, and just enjoying doing nothing much.  For one of those weeks our daughter Helen flew out to join us, so we did a touch of sightseeing too. The nearby town of Lavrio was the centre of ancient Greek silver and zinc mining, and still bears the scars as well as the ruins. In spite of that it is a very pleasant little port, with a couple of good supermarkets and an internet cafe where, for the price of a cup of coffee, we can spend an hour or two updating the blog and catching up with emails. Quite close to the campsite is the temple of Poseidon at Sounio, a romantic ruin on a cape overlooking the Aegean and many of the Saronic Islands.  Here Byron (allegedly) carved his name on one of the pillars, joining the ranks of 19th Century graffiti artists.

The trip from Bacchus to Athens sums up Greek transport policy.  A 25-minute drive takes us to the metro which runs from Athens to Athens airport, where, at the stop before the airport, there is a park and ride.  Using the term loosely of course, as there is no car park.  For half a mile in every direction the roads, verges, farm tracks and central reservations are clogged with parked cars. But the fare to Athens is only €0.80.  That is 64p for a 30 minute run to the centre of Athens and a further hour of travel within Athens (bus, trolleybus or metro).  Excellent value! There is not much that has not been written about Athens.  The splendour of the Acropolis and the city around its slopes matched by the crowds, noise and traffic pollution.  In the run up to the Olympic Games (2004) the city pedestrianised many of its streets, and that has improved pollution greatly since last we were here, but there is still a long way to go.  However we spent two very enjoyable days in perfect weather for sightseeing - warm and sunny but with a pleasant breeze.

Our first day ended on a slightly hysterical note when we watched the changing of the guard outside the Ministry of Silly Walks, sorry, the Greek Parliament.  Soldiers in short skirts, white tights and hob-nailed clogs with pompoms on the toes perform a slow-motion ballet that must surely have been where John Cleese got his inspiration.  We had to control our hysterics in case we were shot for treason (they were all carrying rifles which looked a lot more serious than their costumes.)  On our second day we went to the National Archaeological Museum and then climbed Filopappos Hill for a splendid view of the sunset over the Acropolis, followed by an excellent meal at a taverna in Plaka.Helen flew back to what sounds like a very chilly England ( it s still in the 20s here, ha ha) on the 26th October and we continued to enjoy the sun and sights.  There are a number of ruins not far from the campsite, nowhere near as impressive as Athens but still interesting.  The temple of Artemis at Vravrona is where Iphigenia (she of Greek tragedy fame, daughter of Agamemnon) was buried.  She founded the temple to appease the gods she had offended by killing a bear.  She populated the temple with little girl priestesses, called "bears". Quite how the Gods would be appeased by that who knows, but the site was very peaceful, so presumably it worked.We are now planning to abandon the caravan for a few days to drive up to Meteora, where there are a number of old monasteries perched on the top of rocky pillars.  After that we will think about where to move on to next.