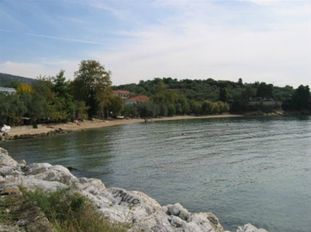 We headed south from Kavala, aiming to stop at Platamon, on the narrow strip of coast between Mount Olympus and the sea.  However the journey was quicker than expected and that same narrow strip of coast was shared by a motorway and a railway line, so we decided to continue south towards Volos.  This meant going inland at first, through the beautiful Vale of Tempe, the narrow gorge between mounts Olympus and Ossa, then across the Larissa Plain.Volos is a large city situated at the head of the Pagasitikos Gulf, a huge inlet of the Aegean which is almost landlocked, making for calm warm waters.  The arm of Thessaly which creates this is most picturesque, consisting as it does of a chain of mountains peaking at Mount Pelion, mythical home of the Centaurs and summer resort of the Greek Gods.  Volos was in ancient times known as Iolkos, the port from which Jason set sail with the Argonauts to find the Golden Fleece.  It is still a major port, the third largest in Greece, and it is a nightmare to drive through, even without a caravan! South of Volos, 15 miles along the Pelion peninsula, we found Camping Hellas, a delightful site in an olive grove right on the beach, based round a lovely taverna.  Sadly, being end of season, the taverna was closed, but the bar was still open and wi-fi was available, which gave us a chance to update the last two blogs.  There were about a dozen other campers, all German.  The Pelion peninsular is yet another lovely area of Greece that rarely appears in our holiday brochures but is well-known to the Germans.

The spot was idyllic but for two things:  camping in an olive grove provides great shade from the heat of the sun, but in wind and rain the sound of hard olives falling on to a caravan roof is a tad disturbing.  Secondly, being a seasonal Greek site not much attention had been paid to drainage, as during the long hot dry summer it is not needed.  However the previous week's stormy weather and  heavy rain on our first night showed up the inadequacies of the drainage!    During our travels we have been very lucky with the weather, particularly when we hear of what is happening back home, but when we have had rain we have certainly had it in one of its extreme manifestations.  That night in came down in sheets, and the roar of thunder was continuous as it echoed round the mountains behind us.  At the peak of the storm we had a lightning flash right above us, with a crack of thunder that sounded like a huge explosion.  Given the Greek air force activity during the day we wondered if we were being used for target practice. We emerged next morning to a wet muddy site, with one motor home surrounded by sandbags and another where the occupants had had to dig a ditch around it to prevent them being flooded! Our awning was under water, but fortunately nothing was damaged, it soon dried out and for the rest of our stay the weather was hot and sunny. We didn't feel like doing a lot of driving, particularly along Greek mountain roads with Greek lunatic drivers, but the second morning we had to visit a supermarket, so took the opportunity to go up above Volos to Portaria, a charming village full of springs and traditional Peliot buildings.  From here the views over Volos were superb.