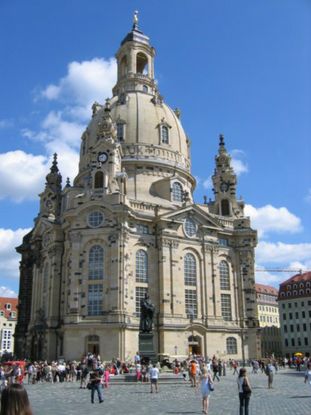 Dresden has had a double disaster to recover from - first the horrendous Allied bombing raid of 13 February 1945 which virtually destroyed the beautiful and historic Baroque city, killing at least 35.000 people, then 40 drab years under Communism when the height of architectural achievement was vast, bunker-like, prefabricated blocks of flats.  But since reunification it's undergone a renaissance.  The historic centre has been rebuilt exactly as it was.  According to Michael Palin in "New Europe", some locals felt that fronting state-of-the-art modern buildings with gaily-painted Baroque facades has resulted in a kind of German Disneyland, but given the choice between grey slabs or pastel-coloured elegance, I know which I would choose! (Although outside the centre there is still plenty of depressing East German building in evidence.)I  (Lesley) was especially interested to see Dresden, as my uncle was actually in the city as a prisoner of war at the time of the firebombing.  The prisoners were far enough from the centre to be safe, but were made to help with the grim task of clearing up and retrieving the bodies afterwards. The same subject is dealt with, albeit in a science fiction context, in Kurt Vonnegut's "Slaughterhouse Five".  We also had friends in Copmanthorpe who went to the re-opening of the famous Frauenkirche when rebuilding was completed in 2005.It was an easy drive from our campsite (Lux Oase, in the village of Kleinrohrsdorf) to the city,and the first pleasant surprise was that we could park on the edge of the Altstadt all day for a mere three Euros.  It's a fairly compact area, easily walkable in a day, with lots of pleasant squares full of pavement cafes. Our first stop was the Neumarkt, a large square surrrounded with pretty Baroque buildings with the Frauenkirche at its centre.  You can clearly see how the devastation has been repaired as the blackened stones in the Frauenkirche are the originals and the light coloured ones, by far the majority, are new.  The interior is a beautiful light confection of pale pink, green and gilt.We continued to stroll around the streets admiring palaces and churches pausing at the Bruhlsche Terrass, which used to be called the Balcony of Europe, to see the view of the Elbe, which flows, through the city (on its way to Hamburg, no less). In the Zwinger, a Baroque palace built by Augustus the Strong, we went into the Old Masters' Gallery to see Raphael's Sistine Madonna.  The two wee cherubs at the bottom must be the most reproduced art images of all time.We felt there was a very pleasant laid back atmosphere in Dresden, with lots of street performers and buskers adding to the ambiance by playing appropriately Baroque music.  Altogether a very enjoyable day.We hadn't expected there would be much else of interest in the area around the campsite, but we were wrong.  There are numerous stately homes and mediaeval castles within a fairly small radius.  One of these is Schloss Moritzburg, the Baroque hunting lodge of Augustus the Strong, (yes him again).  It was gorgeous from the outside, surrounded by a huge ornamental lake, but rather odd inside.  It is famous for two rather bizarre collections: leather wall hangings (what is it about the Germans and leather?) and Europe's largest collection of antlers.  Some of these, kept in the "Room of Monstrosities", were hideously deformed.  Augustus cropped up again in Burg Stolpen, a pretty cobbled village with a forbidding mediaeval fortress in which he imprisoned his cast-off mistress for 49 years until her death.  Augustus the Strong, yes: Augustus the Nice he was not. The other big surprise in this part of the country was an area called "Swiss Saxony", an extraordinary landscape of tall sandstone outcrops which have weathered into strange columns.  In one place, called Bastei, there is a series of walkways linking the rocks, which give dizzying views down to the Elbe below.The campsite  was really excellent, combining the usual high German standards of cleanliness and efficiency with a very laid-back atmosphere and pleasant, green surroundings by a small lake. One night we ate in the restaurant, enjoying huge plates of very filling German food.  We spent several days just relaxing, walking by the lake and communing with the sheep.  We also used the time to plan the next few legs of our trip.  With internet this should have been easy, but as usual we had wifi problems, so instead of doing it in the comfort of our caravan John had to spend hours in the camp's reception.  We've decided that, after our next stop (Prague) we'll go through Slovakia, Hungary, Romania and Bulgaria to Greece.  The problem is we can find very little information on Bulgarian campsites.  This either means that there are very few of them, or that they are so appalling that none of the camping and Caravanning organisations will have anything to do with them.  It certainly looks as if things will get a bit more interesting after Prague!