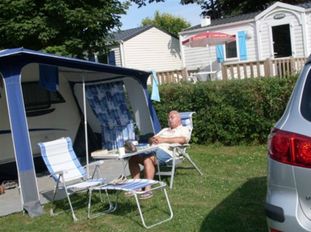 On our flight north to escape the heat and the mosquitoes we went from one weather extreme to the other.  It was a long, tiring drive on the autoroute in torrential rain with lorries kicking up clouds of spray.  As we neared our destination, a campsite at Mousseaux sur Seine, just past Mantes (which is twinned with Hillingdon, tell Sarah R!) the tom-tom took us by a very peculiar route along narrow, rough roads in the middle of nowhere.  However, we found the campsite, Les Loisirs des Groux, and contrary to expectations it wasn't under water.  In a funny way it was nice to feel cool again and sit inside our cosy little home enjoying a cup of tea while the rain drummed on the roof.

This is a very odd campsite, but we rather like it. Probably because we're odd, too! Most of the caravans here are statics and look as if they're lived in permanently, as they have little fenced gardens and sheds, and some of them are clearly weekend retreats for Parisians (Paris is about 80 km.)  There's no swimming pool or bar or restaurant, and the toilet block is in need of refurbishment, but it does have wi-fi - an unexpected bonus - and a washing machine, which at 2 euros a go is the cheapest we've yet come across. Next day, 3rd July, was sunny so I put in a load of towels and bedding, and what a pleasure it was to take them off the line later in the day, clean and dry!  It's no problem washing socks and undies by hand but you can't beat a machine for big stuff.

Anyway, enough of the laundry news - now for the cultural bit.  We chose this site as it's near Monet's garden at Giverny, for which we headed once the washing was done.  It wasn't as commercialised as we'd feared, although virtually everything in the village is Monet-oriented, but all done in the best possible taste!  We had a pleasant lunch in the Waterlilies Restaurant then joined the throngs at the ticket office, and had another nice surprise - only 5.50 euros to get in.  We've paid a lot more for less interesting places elsewhere.  The gardens were every bit as beautiful as you'd expect, so long as you could ignore the hordes of American and Japanese tourists, and the house was fascinating, with a lovely yellow dining room and blue-tiled kitchen, the original colour scheme chosen by Monet himself.

We continued the arty theme next day (also sunny, luckily) by driving along the "Parcours des Impressionistes", a short route along the banks of the Seine where Monet, Sisley, Renoir and Cézanne had painted landscapes - and at each point, there was a reproduction of the original work, so you could make a "then and now" comparison of the views.  The countryside around the Seine in this area is very pretty and you can see why it appealed to the Impressionists, especially with the ever-changing clouds, the blue sky and the golden cornfields.Incidentally we've been able to keep up-to-date with Wimbledon thanks to our onboard TV.  We haven't been able to get a signal in some areas, but it's excellent here so we can watch the BBC!  We're setting off for Caen on Sunday where we'll spend a couple of nights before getting the ferry on Tuesday morning.