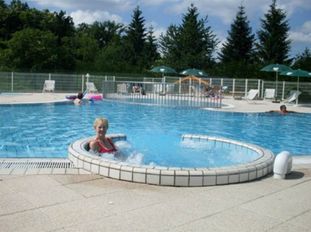 We arrived at our next campsite, Camping Indigo Royat, in the heart of the Chaine des Puys, an extraordinary area which consists of 80 extinct volcanoes which were active from 60,000 to 6,000 years ago. There are numerous hot and cold springs, the most famous of which is Volvic.  In the evening we decided to drive to the top of the nearby  Puy de Dome, at 4806 feet  the highest of the cones, as the Michelin guidebook said the view was best at sunset.  All around we could see smaller volcanoes,  some with craters and some dome-shaped, all now covered in trees, silhouetted by the setting sun. An extra show was provided by half a dozen paragliders hurling themselves off the summit then hovering on the updrafts - a surreal sight.

Later that night, after we'd gone to bed, we were woken by a series of deafening bangs echoing around the surrounding hills, and thought the long-extinct volcanoes had come to life again - but it was just an enormous firework display in nearby Clermont-Ferrand . Nothing is more frustrating than being able to hear a huge firework display but to be unable to see it!

The next day was Sunday and John spent a futile morning searching for an open supermarket to buy a few basics, but they were all closed - they certainly observe the Sabbath here more than anywhere else we've been so far!  Luckily he found a small Spar open - must be owned by heathens.

After lunch we visited one of the extinct volcanoes, Lemptegy, which has been quarried for the lava which is used for all sorts of things, including making cat litter!  We went on a tour of the crater in a small train with a manic young guide gabbling volubly in French.  At the end of the tour there was a very entertaining theme-park type experience called The Exploding Mine, which was not recommended for anyone suffering from cardiac problems, claustrophobia, pregnancy, hearing problems, respiratory problems etc.  Luckily we survived undamaged.We had hoped to have another trip up the Puy de Dome but the next day was cloudy, though still warm, so we went to the supermarket and then relaxed by the campsite's lovely pool, ready for our next journey, to Bourges.