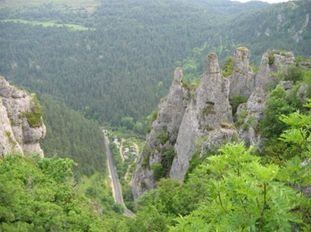 Feeble French joke: Please note that Causse is spelt with an au not a ui and the Gorges do not need a soutien!!  (Note from Lesley:  trust a man to think about legs and boobs.) The causses are high limestone plateaux at the western end of the Massif Central, rising to 1100/1200m.  The Gorges are formed where millions of years ago caves in the causse collapsed, to form deep river valleys, up to 400m below the causses, which makes for spectacular scenery.

The long climb up from the Mediterranean coast was a real test for the car, pulling the weight it has  behind it, but it managed, just.  The high point of the journey (literally)  was the spectacular Millau Viaduct, taking the motorway across the Tarn, a few kilometres south of Millau and several hundred metres above it.

We then had to drop down to the Tarn valley, then into the Jonte valley and along 20 km of the Jonte Gorge, a twisty turny narrow road up a spectacular canyon, to the campsite at Le Capelan, Meyrueis, which is a long thin site between the road and the river.  We are camped here with a lovely river and rapids a few feet from our window and 200/300 metre cliffs on either side.  Even more amazing, and a bit disturbing, is the number of vultures circling overhead!

One could spend months exploring the hills and valleys in this region.  We have just two days.   First we went to Mont Aigoual, which at 1567m (5100ft) is the highest peak around, the site of the French Meteorological research centre and the source of spectacular views including Mont Blanc, most of the French Mediterranean coast and the Pyrennees.  That is on a clear day in January.  On a hot day in June we were limited to the Cevennes, but that was spectacular enough.  On the way we passed the Abime de Bramabiaou, where a river literally spouts out from the side of the cliff to join the main stream.

The second day was a mind-boggling trip down the Gorges du Tarn.  This is perhaps the most well known of the French Gorges, and rightly so.  Mile after mile of winding river, clear and blue, rapids and waterfalls, flanked either side by towering limestone cliffs, sometimes only 25 metres apart.  We had lunch at a beautiful village halfway down, La Malene, served by an elderly lady who made Basil Fawlty appear the height of courtesy and efficiency.  A good lunch though!  Towards the end of the gorge we climbed to the Pointe Sublime, which at 861m above sea level is 440 m above the gorge, for amazing and dizzying views of the river.We now have a working wi-fi, courtesy of a little plug -in from Carrefours, so pictures have at last been uploaded for this blog and for the previous ones.

On to Clermont Ferrand tomorrow, to a little town called Royat, where a natural radioactive gas carbonates the hot springs.  Lets hope it's not too radioactive, or this may be our last entry!