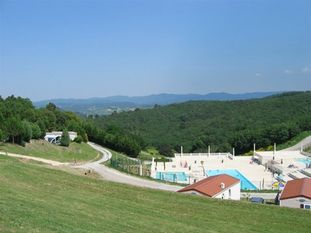 On Friday 20th June we arrived at Domaine d'Arnauteille, a beautiful campsite on the top of a hill 20km south of Carcassonne. The temperature was 33 (that's 92 in English), with very little shade and not a breath of wind.  Our original plans to explore some of the Cathar castles in the area were immediately dropped, replaced by a relaxing few days by the pool!

We could not however come this far without seeing Carcassonne itself, which we did on Monday. Carcassonne is a Unesco World Heritage site, which is obvious from the outside, a town surrounded by mediaeval walls and towers straight from a fairy tale.  Inside should have been as good, but unfortunately the crowds, the billboards and the tacky shops let it down somewhat.  Nevertheless it was well worth the trip.  We have promised to return to the area next spring, when it is not so hot, to see more of this wonderful countryside and its castles. A visit to the HSBC in town furnished me at long last with a gold Carte Bleu and a PIN number, so I am finally able to draw on the Euros I sent to France three weeks ago.  The end of a long, tedious and expensive saga, which would have been even longer but for the intervention of Kay-Lou at Huddersfield, who was able to intervene and sort out the mess the UK side had made.A word about the campsite.  The owner seems to have huge ambitions to duplicate a Roman Town.  The pool complex is like an Olympic stadium, while the toilet/washing blocks are Roman Baths, complete with statues, fountains and porticos.  Very luxurious! From one side of the site there are views right across the Corbieres vineyards, rolling hills and the Pyrenees foothills. At the other side there is the hill village of Montclar with the Malepere vineyards.  The local brew is Blanquette de Limoux, not in any way related to blanquette de veau, but a sparkling champagne type white wine, every bit as good as champagne but only 4 Euros a bottle. Our next stop will be the Tarn Gorges area, Lozere and the Cevennes.